What Can We Do to Prevent the Next WannaCry?

On May 12, 2017, attackers identified a vulnerability in a Windows device somewhere in Europe — and in the process, set off an attack that would ultimately impact roughly 200,000 victims and over 300,000 endpoints across 150 countries. The devastation wrought by WannaCry caused financial losses of roughly $4 billion before the strain was halted by an unlikely hero just hours later. But perhaps the most devastating of all was that it was completely preventable.

To help raise awareness about ransomware strains like WannaCry and the steps needed to combat them, INTERPOL in 2020 teamed up with cybersecurity firm Kaspersky to declare May 12 Anti-Ransomware Day. By taking a few important steps, organizations can help stop the next major ransomware attack, averting the potential for downtime, reputational damage, fines and more.

“Cybercrime and cybersecurity may seem like a complex issue that is difficult to understand unless you are an expert in the field — this is not the case. INTERPOL’s campaign aims to demystify these cyber threats and offer simple, concrete steps which everybody can take to protect themselves,” INTERPOL’s Director of Cybercrime Craig Jones said.

In the years since the infamous attack, ransomware has continued to grow. In 2021, SonicWall Capture Labs threat researchers recorded 623.3 million ransomware attempts on customers globally. This represents an increase of 105% from 2020’s total and a staggering 232% since 2019. 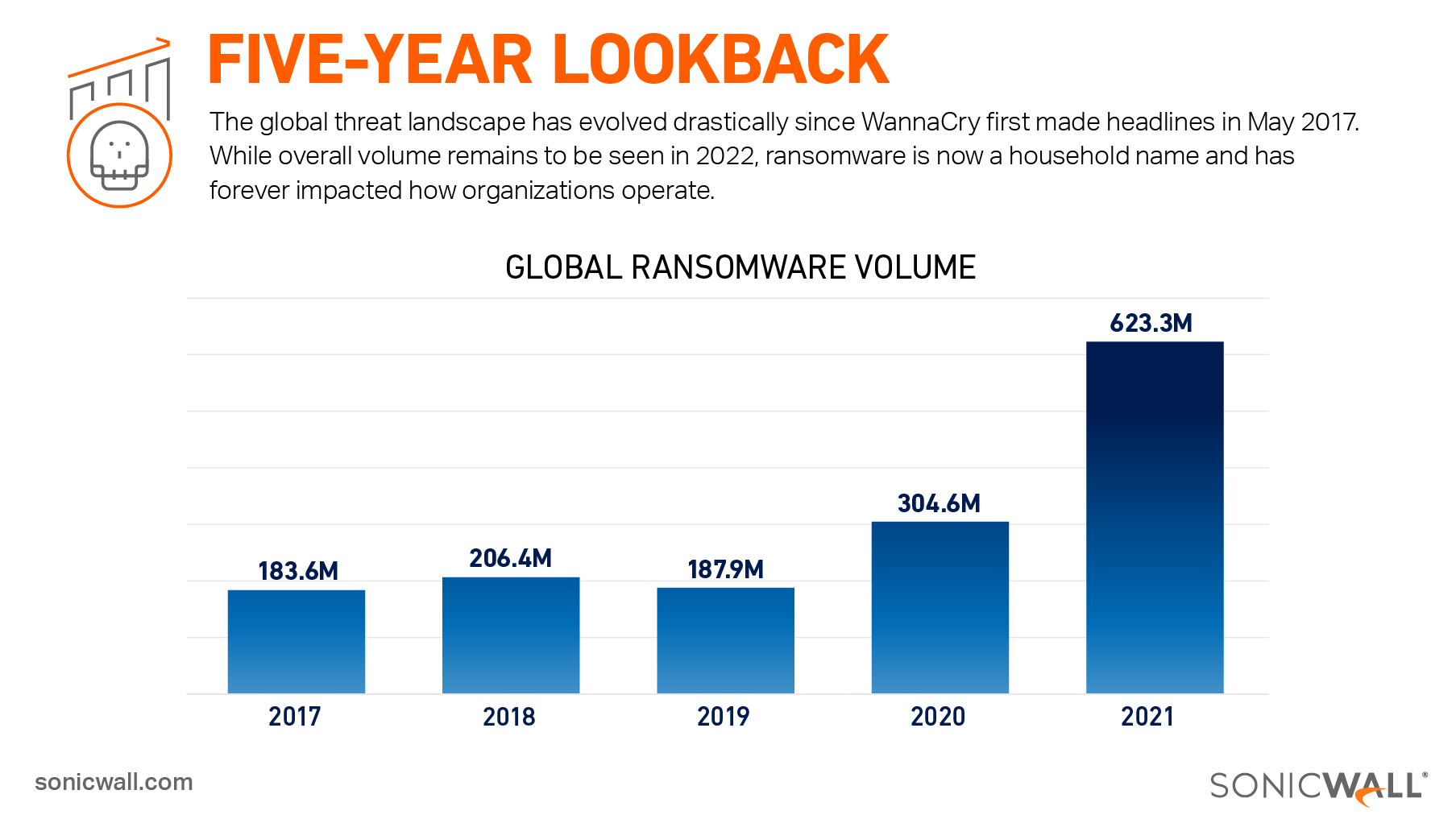 And while ransomware was a hot topic worldwide due to attacks such as WannaCry and NotPetya, which would begin its own savage trek across the globe just six weeks later, ransomware volume in 2017 was less than a third of what it was in 2021.

While variants such as Ryuk, SamSam and Cerber made up 62% of the ransomware attacks recorded by SonicWall in 2021, WannaCry lives on — and in surprising numbers. By now, five years on, the number of vulnerable Windows systems should be virtually zero. A patch for the EternalBlue vulnerability exploited by WannaCry was released two months prior to the attack, and Microsoft later took the unusual step of also releasing patches for Windows systems that were old and no longer supported.

But in 2020, SonicWall observed 233,000 instances of WannaCry, and in 2021, 100,000 hits were observed — indicating that there are still vulnerable Windows systems in the wild that need to be patched.

We Can Worry … Or Get to Work

What made WannaCry so successful was that many organizations at the time took a set-it-and-forget-it approach to IT, leaving vulnerable hundreds of thousands of endpoints that could otherwise have been patched prior to the attack. But while patching is a crucial part of any cybersecurity strategy, it can’t work alone — there are still a number of other steps organizations need to take to bolster their odds against the next big ransomware attack.

“In the past two years, we have seen how cybercriminals have become bolder in using ransomware. Organizations targeted by such attacks are not limited to corporations and governmental organizations — ransomware operators are ready to hit essentially any business regardless of size,” Jones said. “To fight them, we need to educate ourselves on how they work and fight them as one. Anti-Ransomware Day is a good opportunity to highlight this need and remind the public of how important it is to adopt effective security practices.”